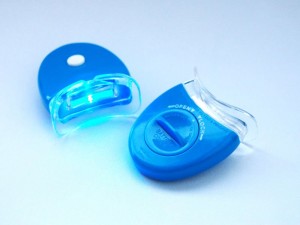 Well the first thing to understand is that there isn’t such a thing as LED teeth whitening. The LED light does not whiten your teeth. The blue light is used to accelerate the speed of whitening treatments that are based in Carbamide Peroxide gels. These treatments can also be applied without the LED blue light, you’ll just need to apply the gel for longer in each session to achieve the same results.

How does LED teeth whitening work?

The LED blue light accelerates the oxidation process of the Carbamide Peroxide gel, that is the process by which the gel releases oxygen. This chemical reaction is what actually breaks the stains in your teeth, and therefore the faster this process happens the faster the treatment will be.

Professional dentists always use LED lights to speed up the process for obvious reasons, the faster the treatment the faster they can be done with one patient and move on to the next, and since they always charge for the whole treatment (not per minutes or hours) the more money they stand to make if the treatment lasts less. Now for at home treatment time isn’t usually a big concern, after all we are talking about cutting time off from a process that lasts under an hour. However many patients still prefer to use LED lights when performing at home whitening treatments, because let’s face it, no matter how comfortable brands try to make us believe wearing those mouth trays is, the truth is the having to wear something in your mouth is never comfortable and the sooner you can be done with it the better!

It’s worth mentioning though that in order for the LED accelerator light to work you need to use a transparent moth tray, otherwise the light waves won’t be able to reach the gel and the oxidation process won’t be affected. If you purchase a kit that comes with a colored mouth tray then you won’t be able to take advantage of an LED accelerator unit and you should either purchase a transparent mouth tray or stick to longer sessions that allow the gel to oxidate at its regular phase.

You should have absolutely no concerns when it comes to LED accelerators safety. As we’ve just seen, the LED does nothing more than speed up the process, but it does not modify it in any way. Oder light based acceleration systems depended on heat to accelerate the whitening process and could burn the soft tissue of your mouth such as gums and lips. That isn’t the case anymore with LED lights since the produce no heat and their effectiveness is based on wave length instead of temperature.